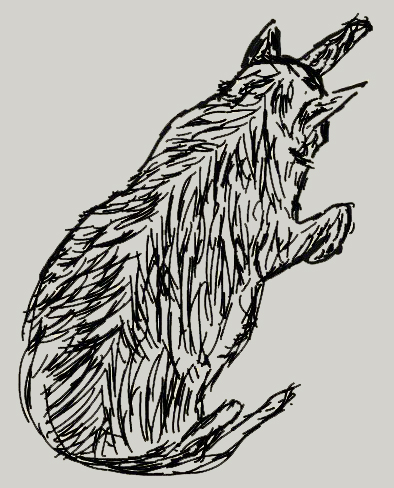 So I am constantly trying to figure out how I want to use this. Right now, I am going to make it my depository for information on things improv that I have done throughout the years and do not want to forget.

Squire and I had a couple of improv things. We had a board meeting for our nonprofit, did a short scene for a night of improv to fundraise for Garrick Paikai, and ended the month with a lunch with his leadership cohort that is also interested in improvisation to build leadership skills.

Board meeting: It was the annual board meeting but of interest we talked about some of the new initiatives we wanted to develop. Jay, Squire, and I are all working on curriculum offerings for our target groups, students, teachers, and businesses.

Short improv scene: Squire and I had a rare chance to improvise together on stage. Although people think the opposite, we really do not get to do it much. The directive for the evening was to do “The Marty.” Multiple pairs doing five minute scenes in real time that are relationship driven, no effects. We decided to make ours a mini-tribute to OTS and did a HUSH-inspired silent scene. Since we decided not to talk, we had to rely on eye contact and the actions and reactions of the other. I am happy to say that we made the most of the relationship because we did not have the option to get mired down in creating business that did not add to our interactions with each other. We had five minutes but edited out at 4:10 somewhat abruptly. In retrospect, we should have let some of the moments land and in a weird way take our time with it. In the scene, Squire threw his cell phone away and when I went to find it, I knew exactly where it was, which I probably wouldn’t have. I should have taken the moment to “find” it. Also, I got a little emotional at the end but if we played it right, we should have sat back down as we were standing on two blocks and looked back out at the view we established. That would have been a great button. Of course, part of me was worried about the time but we obviously had enough time left. Garrick liked it, he made a kakegoe (shout or call) that we were pleasantly surprised to hear, “Mattemashita!” This made it all worth it for us, we went in with the right mindset and did something for the honoree.

I just wanted to make sure that I kept note of it for future reference, if we ever want to look at doing more improv in this way.

Squire and I are going to be putting on an auditioning workshop at Kumu Kahua Theatre in the next month.

It should be a blast mostly because we are going to work it around some input that we received from directors in the community. It actually made our job a little easier.

We are going to theme out our 8 sessions over four weekends, in order, 1) playing without fear, building trust and having fun, 2) movement, 3) voice, and 4) acting.

WHAT: Improvisation Workshop taught by Monica and Squire Coldwell

IMPROV FOCUS: Audition skills, confidence, working with others, being willing to let go of your fears, and preparing you to sing, dance, and act your way through your next audition.

We will see if people show up.

So I wanted to share about one of the highlights this summer. Squire and I directed a show at Kumu Kahua Theatre. It was special for many reasons, 1) because it was the first show the both of us have worked on together in a long time, 2) it was at Kumu one of our “homes,” and 3) our lives are considerably different from the other times we’ve been this involved in a show.

Normally, I would have wanted to give you a blow by blow of the process while we were doing it but it went by so fast.

First off, we were going to do an improv workshop but Donna Blanchard floated this idea of directing a show at Kumu based on submissions they had received around the 38 minutes around Hawaiʻi received a false missile alert of an inbound ballistic missile.

The process for us was, we looked at and chose the pieces we were going to put in the show based on a submission call out that Kumu had made a week after the event, had auditions, and jumped straight into three solid weeks of rehearsals before we had to have our cast ready to act and improvise in front of an audience for another three weeks of shows.

Challenges were, not everyone had acting experience or improv experience, we had a short time to do both, and we had to teach everyone how to improvise in the style that we thought would serve the show the best.

The overall concept of the show was to have the actors perform, based on what we could do in such a short period, the most stage ready pieces in the first act, and use those pieces to make the audience comfortable enough to share their own stories in the second act. We tried to set up the show as naturally as possible, having the actors pretend to be audience members, breaking the fourth wall whenever we could by using the whole space, having moments of interaction between the cast, the crew, and the audience, and having the our tech and actors exchange places to show that everyone really is a part of the show.

This worked out the way we had envisioned it, we had no shortage of people volunteering their stories and all types of people willing to do it. We weren’t being overly cocky but because of what we had experienced so far through auditions and talking to others about their experiences we knew that people had stories and they were all unique. The odds were in our favor that people would be willing to share.

I have so many stories based on the people in the audience and what we learned about Hawai’i and the people that make up this wonderful place. The best part of the experience was getting to hear more stories and feel the connection between the performers and the people that came to the show. But delving it this subject would definitely take a really long time.

So I’d like to end with some general thoughts, although it was a terrible 38 minutes to live through, we all lived through it together and came out unscathed at the end, how lucky is that. Many people realized this and sought out what really mattered to them. Hawai’i is a very special place and what really highlights that, and our fragility, is what makes us pretty amazing and can easily brings us together. Squire and I also knew that this show was going to be special because of how different and unique each of the experiences people had were and continued to be during the run of shows. I may not remember every single line of every story shared in the second act for the shows that we were able to watch, but I remember every single person who shared, their story, how they felt, and how it made me feel with them letting us in and being a part of our show. 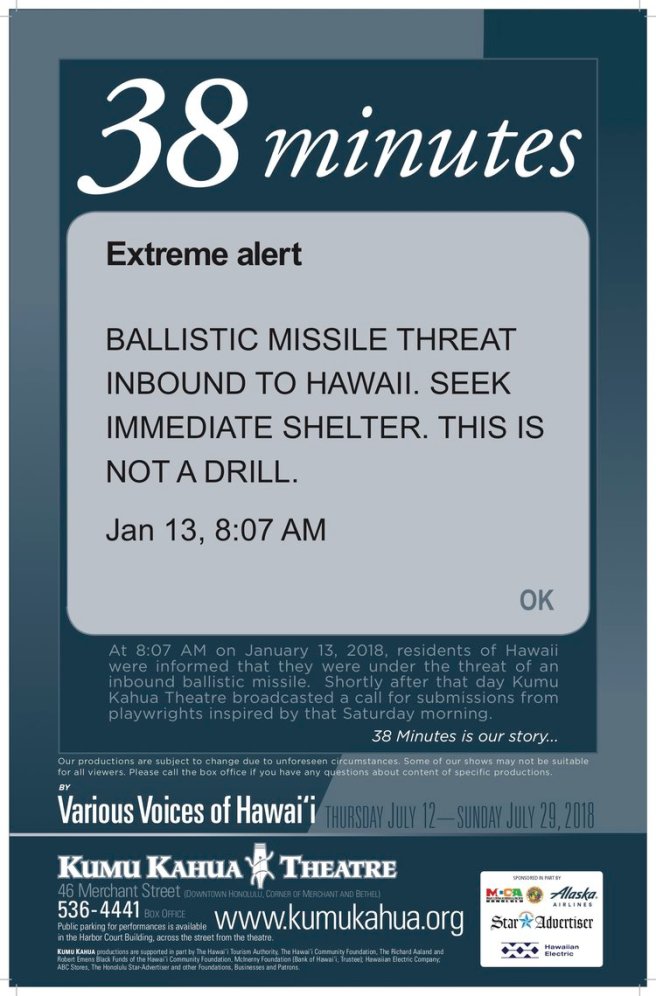