Turtle heading back to sea.

Squire and I had another great day on the North Shore via Kailua today because we got to share it with our friend, Ipo. See picture below.

We were also lucky enough to see something new along our trek. A Hawaiian monk seal beached itself on shore and we were able to get pretty close to it and watch it move towards the water. (Taken with IPhone 4s video)

Those were the highlights for me, but we did a fair share of eating also, which isn’t the norm. We started off with breakfast at Cinnamon’s because Boot’s and Kimo’s was closed for maintenance, then Giovanni’s Shrimp Truck for lunch and BBQ corn on the cob (island style), and we topped it off with Matsumoto’s shaved ice for dessert. It’s safe to say that I ate enough for today and I had a great many things to look at and take pictures of to make the day breeze on by. Here are some of my favorite shots with my little nikon coolpix s9100 (and I’m seriously loving it). 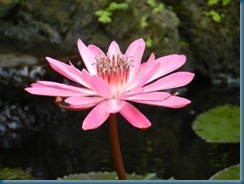 Here we stopped at the only Macadamia Farm left in Oahu and looked through their shop. When we went around back we saw some chickens and small boutiques. There was a little pond with some fish in it and at least a dozen frogs. I took a lot of pictures of them but I’m not sure I should share my pictures of frogs, I admit that they aren’t that photogenic, but here’s a pic of one of the water lilies there.

When we left there we happened to be passing a park area that had a few people gathered looking at something on the beach, Ipo and I noticed that it was a beached Hawaiian Monk Seal (endangered) and quickly yelled at Squire to pull over so we could see him in all his glory. 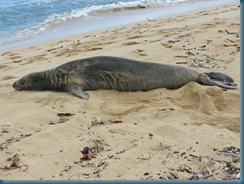 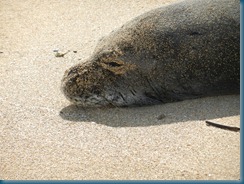 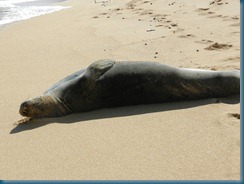 Next stop was Sunset and then we made our way to one of my favorite beach stops (Pipeline), the waves are awesome and as they come crashing down they (for lack of a better way of explaining it) crescendo back into the air. Here are some of the shots of the beach (one of my favorite types of shots – low to the ground) and also a couple with Squire in them with the back drop of the waves and their crescendo(s). 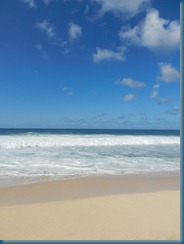 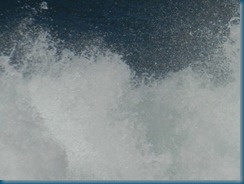 One of our last stops before we made our way to Haleiwa was Shark’s Cove, named as such because of the shape of the reef. We have always seen it but because it’s a one-way entrance, if you miss it, you don’t have an opportunity to get into the park again unless you turn around and try to find it again. So we’ve always continued on without stopping. Today we made the turn and I took some pictures of the fish in the water but I liked this picture particularly of Shark’s Cove, so here it is.

And no trip to the North Shore is complete unless I see turtles, so here we are and we were lucky enough to see this guy make his way back into the sea (video at the beginning).

What a perfect day to share with a friend.

2 thoughts on “Another Day at the Beach”