Okay, this is not working at all. Trying to write and road trip at the same time just doesn’t work. We have been traveling non-stop and have not had much time to rest. It’s been great though, don’t get me wrong. But I’ve obviously been very bad at blogging and the things that we’ve done in between time have started to mush in my mind. I really haven’t had time to take it all in or organize my thoughts.

But I guess I should start with letting you all know why this road trip has happened in the first place. Squire and I are trying to get a non-profit that we’ve gotten off the ground. A lot of the grants were due right before my sister, nephew and her husband were to set off to his new assignment in Georgia. They were going to road trip it from CA and my sister asked if we could go as well. Since I didn’t have the time to spare before they left it seemed the best opportunity to spend some time with them and frankly, add to our list of new experiences.

To begin, I was hesitant. Road trips have such a bad connotation, especially when done with family. I admit there have been moments where I’ve gotten a little worked up but what I said to myself in the beginning and what I’ve had to remind myself of a few times, is that this is something that I’ve never done before, I’m very lucky to have this opportunity for myself and with Squire and it really is awesome. So even now I can still smile.

So this is going to be brief and really not well done. I’m going to try to write about AZ, NM, and TX in very little time. Knowing that I won’t be doing any of them justice.

The first state we traveled into on this journey and a lot of road trip lessons were learned there. I know in my mind I realized how long the trip was going to take in hours but every little thing takes up a huge amount of time. And even though we cross the border, it doesn’t mean we are anywhere close to where we need to be. Once in Arizona, we stopped to sleep in Eloy and Flagstaff. We got to see Sedona, Flinstones Bedrock, and The Grand Canyon. Although this only slightly counts we did also stop at the meteor crater a mile long as we were leaving the state. That was awesome to see from far off. The admission was a little steep though so we just drove up to it and drove back out. Oh and by steep I mean that it was just one more expense in the grand scheme of things. The admission for adults was $16 and children were $8. 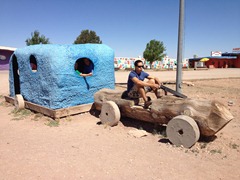 Once we came into the state we went to visit Billy the Kid’s grave site. We found the museum first and spent a good deal of time checking that out and reading about the history of Billy the Kid, the lore, and see some very cool memorabilia. I loved the grave site, mostly because it also had some tombstones of other people from the area and that was nice to see as well. I do like grave yards, I think they have a lot of history in them through the historical timeline they represent through us. 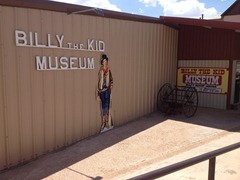 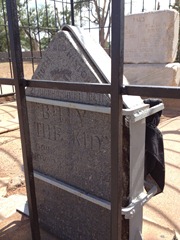 After Billy the Kid we stayed in Roswell and visited the Roswell Museum. I was in heaven. It probably is the most geeky thing I like to do. I like alien lore and enjoy seeing all of it. Part of me blames the movie Paul for my renewed interest in it.

This state is huge. It was a long drive the first day we entered and the second. We stayed in San Antonio and didn’t get into the hotel till 3 in the morning. We then woke up late and made our way to The Alamo. I realized here that I really like the history you can find and what makes a place unique has to do a lot with what they hold onto of that history. The Alamo is a wonderful place that does just this and celebrates an important part of it what makes Texas so special. After Texas we tried to get through Texas but that didn’t happen and we didn’t end up at a hotel until after 12 at night in Houston. It had a lot to do with the fact that the google map we were using had a tough time getting the direction right and we had two messed up directions and the three phone calls that we made to the hotel also proved useless.

We were using a site that Squire actually created to do the bookings for the hotels that we have been staying at during this venture. It’s called bestravelsiteonline.com. It is a site comparison site to search hotels and flights at cheaper rates through all those other sites that are out there, kayak, priceline, hotel.de, travelocity, expedia, etc. So it’s a funnel for over 30 different sites to get you the best prices. We’ve been able to find places that are decent for as low as $37 and we’ve booked with less than an hour to get there. Although we realized that an hour is the best amount of time to give the hotel to make sure that they get our reservation. Most of them have average $50 a night. Sometimes it’s user error though, the google maps being an example and we totally booked for the wrong date (but it was easy enough to cancel because it was far in advance). 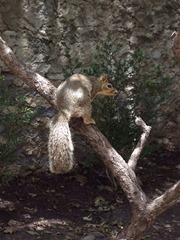 This brings us to Louisiana. And more on that later. Hopefully I’ll be able to catch up soon.